Diamonds, originally a carbon lattice formed in high temperature and high-pressure environment in the earth’s mantle, came to the surface with kimberlite magma during volcanic eruptions millions of years ago. This mineral, which is of little industrial value, should have been just a kind of gemstone, becoming a decoration for a lady, expensive owing to its scarcity.

But with the discovery of large diamond mines in South Africa in 1870, diamond prices faced a collapse, in which case investors set up a monopoly group, De Beers, to control the global diamond trade by controlling production and establishing a single sales channel, thus maintain the public impression of the scarcity of diamonds. In particular, the carbon crystal has been successfully portrayed as a symbol of elegance, luxury and love through large-scale commercial marketing in the past hundred years. The De Beers is the only pricing group. 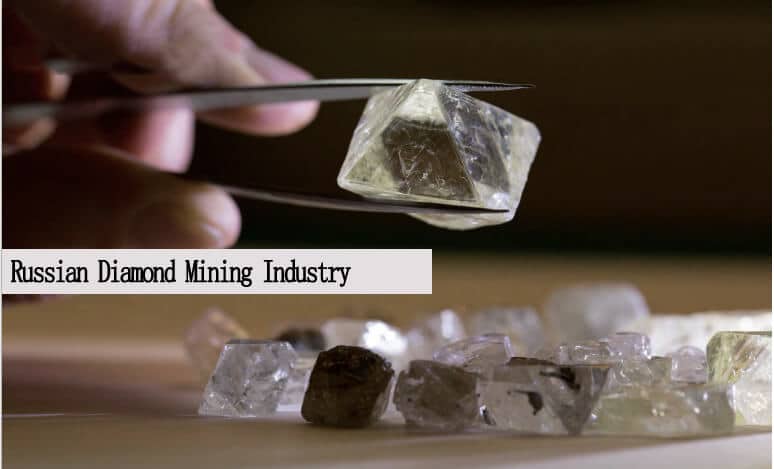 Appear on the world gem scene

The situation is different. Since the end of the 1950s, a troublemaker has emerged, but de Beers has succeeded in integrating it into its single channel system, making it a hitchhiker. What’s more, De Beers has become a subsidiary company owned by Anglo American Resources Group, and its monopoly no longer exists, but it still maintains its position as an industry leader, accounting for 35% of the global market share. And the hitchhiker of the year became the world’s largest producer of rough diamonds, and that was the Soviet Union / Russia.

In 1940, Soviet geologists pointed out that the Yakut area was similar to the diamond-rich area in South Africa and should be rich in a diamond. After tough geological prospecting, magnesia-aluminum garnet, a symbiotic ore, was finally discovered in 1953. In 1954, the first diamond-bearing rock was discovered in the western part of the Yakut Soviet Socialist Autonomous Republic, and named “Flash”. Since then, a large number of diamond-rich rock have been found in this area. With huge reserves, the Soviet Union is expected to jump into a diamond power. In 1957, the Soviet Ministry of Nonferrous Metallurgy decided to invest in the development of diamond mineral industry in Yakut and set up the“Yakute Diamond” Trust.

Before the Yakutia deposit was discovered, the Soviet Union produced very few diamonds, which it secretly exported through De Beers because of the Western blockade and De Beers’s monopoly.
Whether to enter the market independently and break the monopoly or to continue to accept De Beers’s exploitation, is a question that must be faced in the face of huge future production capacity. De Beers was also nervous about the Yakutia discovery, fearing that his monopoly would be broken. In the end, the two sides eventually agreed to avoid a self-destructive price war, with the Soviet Union losing the right to list independently and being lumped into De Beers’s single channel system, and De Beers had to buy all Soviet diamonds for export. The Soviet threat to its monopoly was removed.
Since Yakut diamonds are mostly tiny, De Beers had to revise its marketing strategy to promote to the public a new idea that diamond perfection is more important than size. Through the secret contract, the Soviet Union became the beneficiary of De Beers’ manipulation of the world diamond market, acquiring a lot of foreign exchange. Since then, the large-scale development of diamonds in Yakut has begun.

A difficult start – the pioneer

The difficulty of early exploitation period was beyond imagination. The Yakut Republic is located in the northeast of the Eurasian continent, the diamond area is located in the frozen earth near the Arctic circle, where with the harsh climate, few people tread, and shortage of infrastructure. The Yakutia diamond Trust had to recruit large numbers of workers with high welfare benefits and build infrastructures such as towns, hydropower stations, airports, and roads. As a result of the unprecedented cost of building infrastructure and high labor costs, diamond mining in Siyakut initially suffered heavy losses, resulting in long-term negative returns for the Soviet diamond industry. 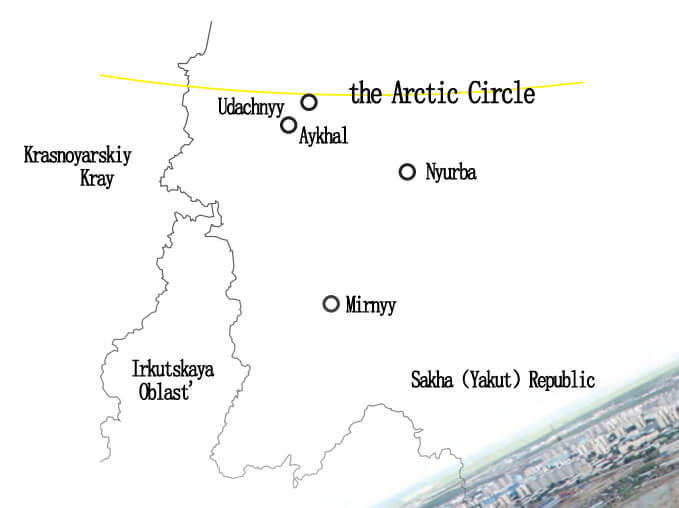 The exploitation of “peace” and “luck” was first developed, which gave birth to the new cities of Mirnyy and Udachnyy.
Despite the harsh conditions, due to the gifts of nature and the hard work of the Soviets, the production of the Yakut Diamond Trust was amazing, rapidly surpassing the world record, and increased 25 times in just seven years. Meanwhile, the Soviet Union was dissatisfied with providing only rough diamonds and began to set up its own gem factory in preparation for getting rid of De Beers in the future. With the discovery and production of Awhar, Interstate and other mines, the production of Yakut diamonds have increased one step further. Since 1971, the production of diamonds in the Soviet Union has reached more than 10 million carats, surpassing that of South Africa, second only to Zaire. On the whole, Yakut diamonds are small in size and contain more impurities, and the quality is not as good as that of Africa diamonds.

After the disintegration of the Soviet Union, the Yakut Autonomous Soviet Socialist Republic became the Sakha Republic, and the Yakut Diamond Trust was reorganized into the Russian-Sakha Diamond Holding Company（АЛРОСА）, for short, “Russian Diamond”. The governments of the Russian Federation and the Sakha Republic hold 69 percent of the shares. Currently, Russian Diamond account for 95 percent of Russia’s diamond exports and 25 percent of the global market (in Querat’s calculations). Its proven reserves amount to 600 million carats, perhaps a third of the world’s total, of which 65 percent are of or close to jewelry quality and can be mined continuously for 30 years. 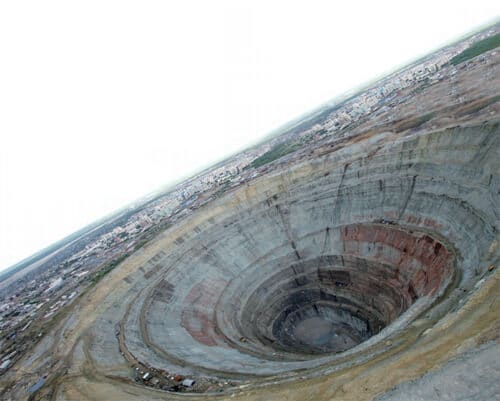 After years of mining, the Mirnyy Mine, which was closed in 2001 because it was no longer worthy to continue to dig down, formed a huge pit 525m deep with a diameter of about 1.2 km, produced $17 billion worth of diamonds since 1957. The mine went underground in 2009 with an annual production capacity of 1 million tons and a life expectancy of 34 years.
The mine named “International”, located 15 km south-west of Mirnyy, was discovered in 1969 and began open-pit mining in 1971 and underground mining in 1999 with a designed annual output of 500,000 tons and a life expectancy of 27 years.

The mine named “Lucky” in Udachnyy is not as well known as the “peace”, but it is larger, with reserves of about 120m carats and a depth of 640m, although open-pit mining is nearing an end. Development on its underground mines began in 2004, is expected run to 2019. By then, the underground mine will have a production capacity of 4 million tons and will become one of the largest underground mines in the world. It is the largest diamond concentrator in Russia with an annual processing capacity of 11 million tons and is equipped with seven 9m diameter autogenous mills.

There are three mines in the Aykhal area, the “Aykhal” was started for open-pit mining in 1961, turned into underground mining since 2008. The “celebration” mine, discovered in 1975， is still in open-pit mining, originally designed to reach a depth of 500m, but recent expansion has been approved, with open pit mining reaching a depth of 700m. The “Komsomolskaya” mine was discovered in the 1970s but was not developed until 2001, the open pit mining depth could reach 460m.

Nyurba was the last mine to be discovered until the 1990s, the Botubinskaya mine was the discovered firstly but exploited until 2015. The newer “Nyurba” mine begun open pit mining at the beginning of the 21st century and has reached a depth of 300m. According to the analysis of the geological environment, the underground mining of these two mines will not be profitable so the production will be stopped when reaching 570 meters.

All rough diamonds are sent to a diamond sorting center in Mirnyy, where they are sorted by size and color and a preliminary valuation. Because each mine’s diamonds are unique, experienced experts can visually identify where they are produced. Unlike minerals like gold, silver, and copper, diamonds are not standardized products and therefore do not have exchanges like bulk commodities. The value is generally based on three characteristics: size (Querat), color, and purity.

After evaluation and registration, rough diamonds can be sent to the Russian diamonds sales network. But while appreciating the brilliance of diamonds, in the face of the huge mines, dumping grounds and tailings ponds in North Asia, should human beings also think, for such a small stone whose price is artificially high, is it worth paying such a high environment cost?