Amphibolite is a dark, heavy, metamorphic rock composed mostly of the mineral amphibole. Amphibolites have very little to no quartz. “Amphibole” refers not to a single mineral, but a group of minerals. Most belong to the monoclinic crystal system, but some belong to the orthorhombic crystal system. They are silicate minerals containing SiO4 molecules. The SiO4 groups are connected to double chains. 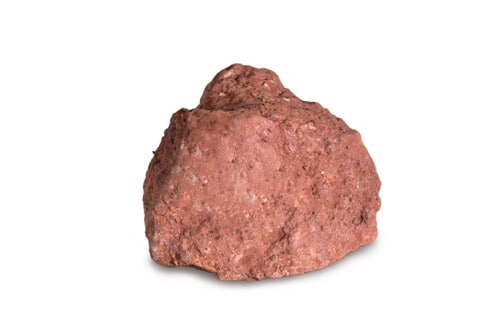 Because aluminum metal reacts with water and air to form powdery oxides and hydroxides, aluminum metal is never found in nature. Many common minerals, including feldspars, contain aluminum, but extracting the metal from most minerals is very energy-intensive, and expensive. Therefore, bauxite is the primary source of the world’s aluminum and it supplies 99% of metallic aluminum. It is also used in the production of synthetic corundum and aluminous refractories.

Bauxite is the name for a mixture of similar minerals that contain hydrated aluminum oxides. These minerals are gibbsite, diaspore, and boehmite. Bauxite forms when silica in aluminum-bearing rocks (that is, rocks with a high content of the mineral feldspar) is washed away (leached). This weathering process occurs in tropical and subtropical weathering climates. This means that many countries with current tropical climates, or that were once tropical, have the largest reserves of bauxite ore, such as Brazil, Jamaica, Guinea, and Australia.

Alternative sources of aluminum might someday include kaolin clay, oil shales, the mineral anorthosite, and even coal waste. However, as long as bauxite reserves remain plentiful and production costs are low, the technologies to process these alternative sources into alumina or metallic aluminum will likely not progress beyond the experimental stage.

Surface Bauxite Mining: IMAR 7th Edition
Approximately 85%–90% of total world bauxite mining involves open pit mining methods, principally in China, eastern and southern Europe, and Russia. In open-pit operations, bauxite is normally extracted from strata typically 4–6 m thick under overburden that may range up to 10 m thick, covered by a thin layer of topsoil with its associated vegetation. At some non-metallurgical mining sites, the overburden thickness may reach 70 m or more.
Open-pit bauxite mining operations may use backhoes, bucket wheel excavators, bulldozers, draglines, power shovels and scrapers for the stripping of overburden from the ore. Also, draglines, front-end loaders, and power shovels are commonly used to excavate and load the crude ore. Loading is usually into haul trucks, or directly into rail cars or onto conveyor systems, for transport to bauxite processing facilities or stockpiles.

Underground Bauxite Mining: IMAR 7th Edition
Depending on the nature of the bauxite, underground operations typically use a basic array of standard underground mining techniques, which include block caving combined with shrinkage stoping, sublevel stoping, top-slicing, longwall, and room-and-pillar methods. Excessive water inflow is a significant problem at most of these mines, particularly in workings developed below the karst water table. In these cases, dewatering shafts are often drilled to lower the active water level at the mine site.

About 85% of all the bauxite mined worldwide is used to produce alumina for refining into aluminum metal. Another 10% produces alumina which is used in chemical, abrasive, and refractory products. The remaining 5% of bauxite is used to make abrasives, refractory materials, and aluminum compounds.

The lightness, strength, and corrosion resistance of aluminum are important considerations in its application. Metallic aluminum is used in transportation, packaging such as beverage cans, building construction, electrical applications, and other products.

Aluminum, the third most abundant element at the Earth’s surface, is harmless to plant and animal life.