Hydrocyclone is a grading device that uses centrifugal force to accelerate ore particle deposition. It needs the pressure to feed ore, so it consumes a lot of power but occupies a small area, cheap, the processing capacity is large, The classification efficiency is high, obtain very fine overflow product, mostly used in the second stage of closed-circuit grinding classification equipment. 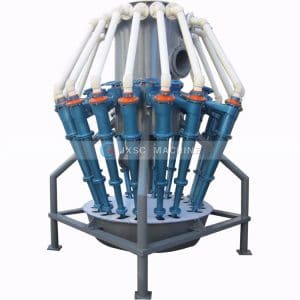 Hydrocyclone is mainly used in mineral processing for:

The upper part of the Hydrocyclone is a hollow cylinder, and the lower part is an inverted cone connected with the cylinder. The two constitute Hydrocyclone Simple operation. The upper end of the cylindrical cylinder is provided with a feed pipe tangentially, and the top is provided with an overflow pipe and an overflow pipe. There is a sinkhole at the bottom of the cone. The parts are connected with flange plates and screws. There are usually lined with rubber, polyurethane, silicon carbide or gloss Greenstone castings in feed port, cylinder and sand mouth, it can reduce wear and replace after wear.

The separation of the mixture under high-speed rotation is realized by using strong centrifugal force. For example, the classic static Hydrocyclone to push the feed mixture into the cyclone at relatively high speed uses external pressure. the mixture moves along the tangential direction of the Hydrocyclone, it will cause the liquid to rotate along the cylinder wall, this motion is generally referred to as the outer swirl.

The particles in the outer swirl are subjected to Centrifugal Force. If their density is greater than the density of the surrounding liquid, the centrifugal force on them will become larger and larger. The particles overcome this resistance and move toward the wall, separating from the surrounding liquid once centrifugal force is greater than the liquid resistance due to motion. The particles that arrive near the wall are pushed by the liquid above the hydrocyclone and move down the wall. It reaches the underflow port and collects to form a suspension with a high thickening degree, which is discharged from the underflow port.

The liquid after separation to rotate downward continue move, entering the cone section, because the inner diameter of the liquid separator gradually reduces, the liquid rotation speed speeds up. Due to the uneven pressure distribution along the radial direction, the closer the liquid is to the axis, the smaller it is and the closer it is to the axis, it becomes a low-pressure area or even a vacuum area, which causes the liquid to move along the Axis.

At the same time, the bottom flow port of the cyclone separator is greatly reduced, the liquid can not be discharged quickly from the bottom flow port, and the overflow port in the center of the top cover of the cyclone cavity moves part of the liquid toward it because it is in the low-pressure zone, thus forming the upward rotating movement And exit through the spillway. 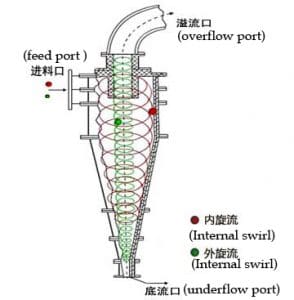