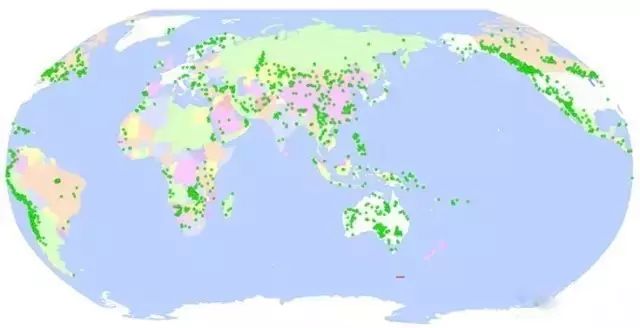 Types and distribution of copper ore in the world

There are various types of copper mineralization, according to the geology-industrial types, which can be divided into: :

The porphyry copper deposit has a large reserve and can be exploited by large-scale mechanized open-pit mining. The ore reserves are often several hundred million tons, and the copper grade is often less than 1%. According to the statistics of 103 porphyry deposits in the world, the average ore volume of a single deposit can reach 550 million tons, copper grade 0.6%, it is one of the important industry copper type in the world.

【Distribution】
The known porphyry copper deposits are mostly distributed in:
(1) the Pacific Rim belt, including the long and narrow porphyry copper belts on the continental margin of the North and South America, referred countries have Canada, USA, Mexico, Panama, Peru, Chile, etc.
(2) The Tethys porphyry copper belt, including Rexk in Hungary, Medanpec in Yugoslavia, Salceme in Iran and the Chaga area in Marquis.
(3) Central Asia-Mongolia, important deposits are Kalmak in the eastern part of Uzbekistan, Koonrad in the north of Balkhash Lake in Kazakhstan, and in the north of Obo in the north-central part of Mongolia. Subulga and the Arrhenian deposits in the east.

Sand shale-type copper deposits refer to layer-controlled copper deposits in sedimentary rocks of different ages. It is one of the major industrial types of copper mines in the world, accounting for about 30% of the world’s copper reserves. The deposits are large in scale and high in quality, with rich associated groups, has high economic value.

【Distribution】
These deposits are widely distributed in the world. In addition to the above-mentioned copper belts, there are the former Soviet Union Udokan, the Jezkazgan copper mine, the US Whitepan, and the western part of Montana, USA, which extends to the southwest of Canada. The special copper belt, as well as the Kolokolo copper belt in Bolivia, is the largest type of Aynak copper mine discovered in Afghanistan in recent years and the Salobo copper mine found in Brazil.

Pyrite-type copper ore refers to a deposit containing a large amount of pyrite and a certain amount of copper, lead and zinc in a certain relationship with the volcanic action of the seabed. In the West, this type of deposit is called a “blocky sulphide deposit”.

【Distribution】
At least 420 deposits of this type have been discovered in the world, Canada, the United States, the former Soviet Union, Spain, Portugal, Cyprus, South Africa and Japan are important producers of such deposits.

This modern deposit was first discovered in the eastern Pacific ridge near 21 degrees north latitude in 1978. Although the copper and zinc grades are very high (copper 6%, zinc 29%), a polymetallic sulfide deposit, 970 meters long, 200 meters wide, 35 meters high and containing 25 million tons of ore, has met the requirements of an industrial deposit for the first time. Its contains 11% copper, 0.8% zinc, and a small amount of silver, molybdenum (0.03%) and tin (0.03%).