Description
Arsenic (As) is classed as a semi-metal, or metalloid. In nature it is commonly found as a metal in low levels in most soils and in higher concentrations associated with some copper, lead and zinc ores. The most common arsenic mineral is arsenopyrite, a compound of iron, arsenic, and sulfur. 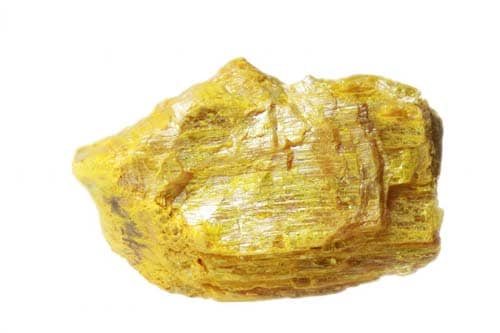 Relation to Mining
Arsenic metal very rarely occurs in its pure form in nature. The most common arsenic mineral is arsenopyrite, a compound of iron, arsenic, and sulfur. Several other, less-common minerals contain arsenic, including orpiment, realgar, and enargite, which are arsenic sulfides. Most arsenic is obtained not from an ore mineral of arsenic, but as a by-product in the treatment of gold, silver, copper, and other metal ores. Environmental laws require that arsenic be removed from ores, so that it does not enter the environment in effluent gases, fluids, or solids.

Significant quantities of arsenic are associated with the copper-gold deposits in Chile, the Philippines, and many other countries. However, many countries produce by-product arsenic from smelting of metal ores. China is by far the largest producer, with Chile and Morocco providing important amounts, and lesser production from about a dozen other countries with metal smelters.

The United States has not mined arsenic since 1985, and imports all the metallic arsenic and arsenic compounds that it consumes. Very little is recycled, except in waste from factories that make arsenic compounds and limited quantities of arsenic metal have been recovered from gallium-arsenide (GaAs) semiconductor scrap.
Uses
Only about 5% of arsenic consumption is of the metallic element. Most of this is used to alloy (mix) arsenic with lead, copper, or other metals for specific uses. As a metalloid, arsenic is a semiconductor, like silicon. This means it conducts some electricity like a metal, but not all the electricity a true conductor like copper would conduct. Consequently, about 1/10 % of arsenic is consumed in the manufacture of gallium arsenide semiconductors for use in electronics. Some arsenic is also used in glass-making.

The majority of U.S. consumption is in the form of chromated copper arsenate (CCA), a chemical used as a wood preservative for telephone poles, fence posts, pilings, and foundation timbers. The CCA significantly reduces rot and eliminates wood destruction by termites, ants and other insects. However, the use of CCA is being phased out in the U.S., and a major decrease in the arsenic market is expected as a result.

Formerly the most important use of arsenic compounds, was as an insecticide sprayed in fields and orchards. This use has entirely disappeared in most countries, due to the poisonous nature of arsenic compounds. Arsenic contamination is a problem in some well-water and may be associated with mine drainage.

Interestingly, a trace amount of arsenic is necessary for good health and growth of animals, including humans. 0.00001% is needed for growth and for a healthy nervous system.