Description
Amphibolite is a dark, heavy, metamorphic rock composed mostly of the mineral amphibole. Amphibolites have very little to no quartz. “Amphibole” refers not to a single mineral, but to a group of minerals. Most belong to the monoclinic crystal system, but some belong to the orthorhombic crystal system. They are silicate minerals containing SiO4 molecules. The SiO4 groups are connected to each other in double chains. 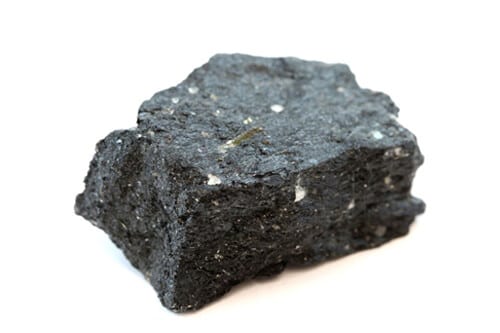 Uses
Amphibolite is very hard and takes a high polish. The combination of its ability to be polished, its dark color and its texture have made amphibolite a popular dimension stone in construction. It is used as paving stones and as a veneer or facing on buildings (both for interior and exterior use).

It is also used as crushed stone for the usual crushed stone applications such as road and railroad bed construction. In this application it is used locally, near the source of the amphibolite. This reduces the cost of transporting non-native stone in from other sources.
Gemologists and lapidary workers have discovered that some amphibolite rock produces a shimmer effect when it is polished. They use rounded and polished pieces of amphibolite for various pieces of jewelry.

Substitutes and Alternative Sources
There are nearly limitless alternatives for the various crushed stone applications for which amphibolite is occasionally used. Any type of rock, local or imported, that can be readily quarried, crushed and transported can replace amphibolite. In the United States, limestone and granite together represent over 80% of all the crushed rock consumed annually. As noted above, amphibolite is used locally where it is easily quarried, reducing the costs of transporting rock in from other regions.

There are many options to amphibolite as dimension stone. Marble, granite, and quartzite, for instance, can all be polished and used as facing on the interior and exterior of buildings. In some environments, even sandstone can be used for building construction. In the end, amphibolite is chosen for the particular color, texture and overall look it gives to a building. Substitutes that provide a similar look include plastics and some varieties of other dark rock like dark granite.