Description
Beryllium (Be) is a silver-white and very light metal. It has a very high melting point at 2349 °F (1287 °C). It is found in nature primarily as bertrandite, which is mined in Utah, or as beryl. The combination of its light weight and high melting point makes it valuable for making metal alloys which are used in electronic and electrical components, aerospace, automobiles, computers, oil and gas drilling equipment, and telecommunications. 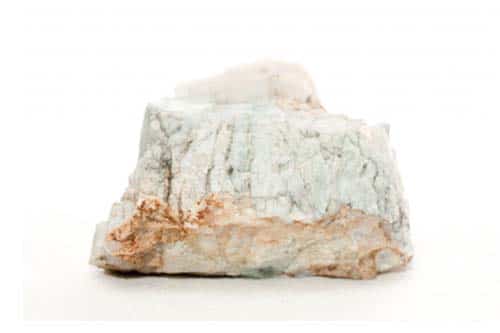 Relation to Mining
The most common mineral containing beryllium is beryl which is found in granites and special igneous rocks, derived from granites, known as pegmatites. Colored, transparent varieties of beryl may be gems, such as emerald (green), aquamarine (blue-green), heliodor (yellow), and morganite (pink). Some of the oldest known gems were mined by the Assyrians, Babylonians, Hittites, and Persians between 5000 and 400 B.C.E.

In addition to beryl, beryllium is found in the mineral bertrandite, which in recent years has become a major ore of this element. Bertrandite is found in certain volcanic rocks derived from granite.

Bertrandite ore mined in Utah makes up nearly all of U.S. production, which is about 90% of the world supply. China produces most of the rest, from beryl ores. Mozambique and a few other countries mine small amounts of beryl. The United States produces and exports large amounts of beryllium alloys and compounds, and thus is a net importer of ores, but a net exporter of finished beryllium products.

Bertrandite Mining:
Unlike beryl, in which the mineral can be identified by color and crystal structure, bertrandite mineralization cannot be recognized by the naked eye. Consequently geologic and geochemical evaluations are conducted on a specific area, followed by a drilling program to determine if an economic ore body exists. After delineating an ore body, overburden is removed to within 2 m of the ore. In the 2-m cover remaining, drill benches are constructed on 7.5-m centers to take samples of the ore body at 0.6-m intervals. Information obtained from analyzing the samples allows cross sections and contour maps to be developed. These maps are used to plan the mining and processing operations. After the maps are prepared, the remainder of the overburden is removed, and the ore is mined, typically with a self-loading scraper. Because of the irregular ore-grade distribution in the ground, the ore is mined from areas defined by drill data and placed in a stockpile in layers to obtain a more homogeneous blend. Further drilling, sampling, and assaying of the stockpiled ore is then performed to generate a map that delineates ore-grade distribution throughout the stockpile. On the basis of the grade distribution, stockpiled ore is selectively trucked to the mill for further processing.

Uses
Most beryllium is used in metal alloys, which account for more than 70% of world consumption. Because beryllium is very light and has a high melting temperature, it is an ideal metal for use in the aerospace and defense industry, almost always alloyed with other metals. Beryllium metal also has the interesting characteristic of being elastic. Consequently, it is used in the manufacture of springs, gears and other machine components that need a degree of elasticity. Another everyday application is in the manufacture of gasoline pumps, because an alloy of copper and beryllium (beryllium bronze) does not spark when hit against other metals, nor emit sparks from static electricity.

Rods made of beryllium metal and oxide are used to control nuclear reactions, because beryllium absorbs neutrons better than any other metal.