Description
Bismuth (Bi) is a silvery-white metallic element with a pinkish tint on freshly-broken surfaces. The most common bismuth minerals are bismuthinite and bismite, but most bismuth is recovered as a by-product from lead processing. 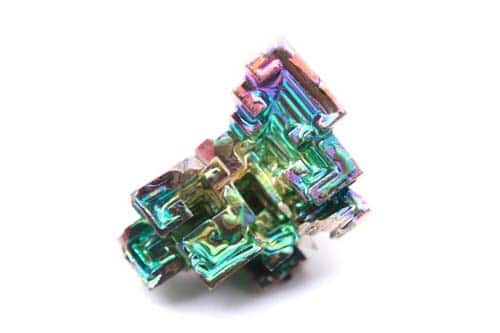 Relation to Mining
Most bismuth is produced from mines in China, Mexico and Bolivia. Only one mine in Bolivia is a primary bismuth mine; in other countries bismuth is a by-product of mining other metals. Bismuth is a moderately priced metal, costing more than copper, lead, and zinc, but much less than gold or silver. In addition, an important part of world bismuth production is from the small amounts of bismuth in ores of other metals, which is recovered in Belgium and Japan from foreign ores which are shipped to those countries for smelting. The United States produces small amounts of bismuth through recycling. Recycled bismuth makes up less than 5% of U.S. consumption.

Uses
Bismuth is used in a number of very different applications. Almost none of the uses is for pure metallic bismuth. The majority is consumed in bismuth alloys, and in pharmaceuticals and chemicals. The remainder is used in ceramics, paints, catalysts, and a variety of minor applications.

Alloys of bismuth are useful for many reasons:

Bismuth and many of its alloys expand slightly when they solidify (freeze). This allows the bismuth to fill all corners of a mold to form a perfectly sharp replica of the mold or the item being replicated. This is also a valued property when used in soldering or plumbing (joining of pipes).

Many bismuth alloys have a low melting point, sometimes even below the temperature of boiling water. Thus a bismuth-alloy casting can be covered by plastic or other material to form an intricate machine part. The bismuth-alloy core is then removed by simply melting it in hot water and pouring it out. The use of low-melting bismuth alloys is widespread in sprinkler systems in buildings. When the alloy melts in fire-heated air, the sprinkler becomes unplugged, and water sprays the fire. This application accounts for over one-third of the bismuth used in the United States each year.

Bismuth metal is relatively inert and non-toxic. It has replaced toxic lead in many applications such as plumbing, bullets, birdshot, metal alloys, soldering, and other applications.

Fourthly, many bismuth alloys are relatively soft and malleable. Malleable means that a metal can be hammered into thin sheets. Bismuth is alloyed with iron to create what is known as “malleable irons.”

Industry uses bismuth in a variety of other applications. Bismuth is a catalyst in the production of acrylic fibers. Bismuth replaces lead in some ceramic glazes and paints, because bismuth is non-toxic.