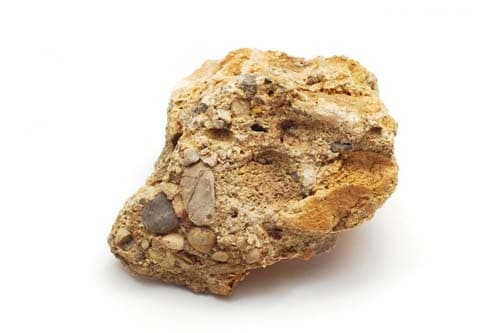 Description
Conglomerate is a sedimentary rock made of rounded pebbles and sand that is usually held together (cemented) by silica, calcite or iron oxide. It is a stone similar to sandstone but the rock particles are rounded or angular gravel rather than sand.

Conglomerate is a coarse-grained rock that is often formed in riverbeds. The pebbles and sand can be composed of many different minerals, but it is usually quartz-based minerals.

Conglomerate has a variable hardness, and it often looks like concrete. It is usually found in mostly thick, crudely stratified layers. Beds of conglomerate are often underground reservoirs of water and petroleum. Conglomerates are used in the construction industry as decorative stone.