Description
Corundum is a crystalline form of aluminum oxide (Al2O3) with traces of iron, titanium and chromium. It is a rock-forming mineral. It is one of the naturally transparent materials, but can have different colors when impurities are present. Transparent specimens are used as gems such as sapphires and rubies. Rubies are red due to traces of chromium in the corundum. All other colors of transparent corundum are called sapphires. Deep blue sapphires are blue due to the presence of titanium and iron.

Geology: Corundum is a metamorphic variant of bauxite and therefore appears most commonly as a metamorphosed bauxite deposit, or as altered aluminous shale. It is unusually dense and nearly as hard as diamond. Gem quality corundum is found in streams as its high density causes pieces to deposit within one local region and its hardness makes it resistant to weathering. 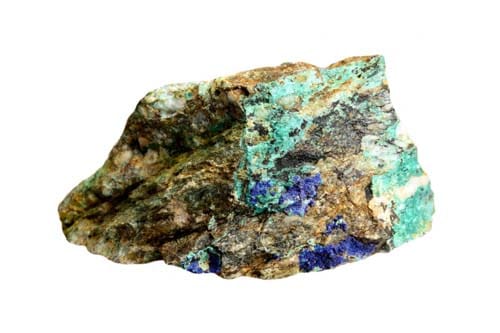 Corundum is used as an abrasive because it has a hardness of 9.0 and can scratch almost anything. It is used in sandpaper and in industrial abrasives. However, in the U.S., synthetics have recently begun replacing natural corundum as the abrasive of choice. Its widest use in the US is for hardening heavy-duty concrete floors and for nonskid material on bridges. Because synthetic corundum is so hard and also transparent, it has many applications in optics and space equipment.