Description
Garnet is usually thought of as a gemstone but most garnet is mined for industrial uses. A very small number of garnets are pure and flawless enough to be cut as gemstones. The majority of garnet mining is for massive garnet that is crushed and used to make abrasives. Garnet is a silicate mineral group; in other words, garnet’s complex chemical formula includes the silicate molecule (SiO4). The different varieties of garnet have different metal ions, such as iron, aluminum, magnesium and chromium. Some varieties also have calcium. 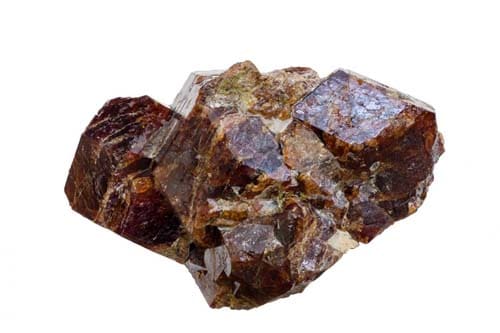 Mining methods for the extraction of garnet vary depending on the geologic environments responsible for the host rock. At hard-rock locations, such as the Barton mine in northern New York, open-pit methods have been employed for decades. In China, hard-rock mining may consist of more primitive methods including hand mining.

Garnets are extracted and processed more easily from alluvial deposits. For example, at the Emerald Creek mine in Idaho, garnet is recovered from stream gravels from slots cut by backhoes or small draglines. These gravels are passed through a trammel to reject the oversize, and garnet is concentrated on large wet-jigging tables. The garnet is then shipped to the mill for final processing and packaging.

Beach deposits, such as those mined in Western Australia and in southern India, lend themselves to low-cost earth-moving techniques using scrapers and bulldozers to cut and excavate benches parallel to the trend of the beach and/or bar deposit. Because manual labor remains central to the operator’s community responsibility in India, mechanized mining provides only a portion of the mine activity there.

In general, processing involves separation of the heavier garnet from lighter gangue minerals and the further separation of garnet into discrete size classes designed to meet the needs of specific markets. Following crushing (which is determined by the nature of the specific deposit or the market served), ores typically are washed to segregate material by specific gravity. Most operators employ traditional spiral classifiers for this step, some in conjunction with hydrosizers. At least one company uses flotation methods for the separation of garnet from heavy nonmagnetic fractions. Concentrates are dried and then sorted by both high-intensity magnetic and electrostatic separators.

One producer that markets very fine grades for precision grinding and polishing markets also relies on wet-separation techniques for quality control. Final separation yields a product exceeding 95% garnet minerals, which usually contains less than 0.5% quartz by weight. The final production step is dry screening and classifying into marketable sizes, then packaging for sales and distribution.

Uses
Garnet is ground to a variety of sizes to be used as an abrasive. Garnet sandpaper was the original application of this mineral. It is also used to make a number of similar products, including sanding belts, discs, and strips. Today, the vast majority of garnet is used as an abrasive blasting material, for water filtration, in a process called water jet cutting, and to make abrasive powders.