Gypsum is a mineral found in crystal as well as masses called gypsum rock.  It is a very soft mineral and it can form very pretty, and sometimes extremely large colored crystals.  Massive gypsum rock forms within layers of sedimentary rock, typically found in thick beds or layers. It forms in lagoons where ocean waters high in calcium and sulfate content can slowly evaporate and be regularly replenished with new sources of water. 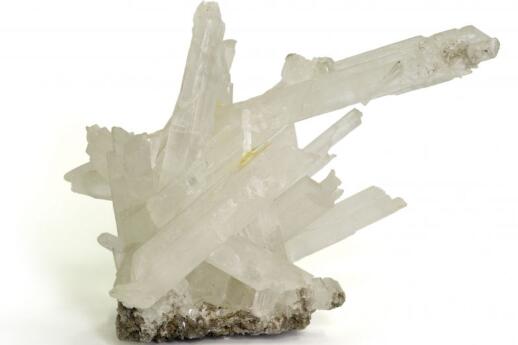 The result is the accumulation of large beds of sedimentary gypsum.  Gypsum is commonly associated with rock salt and sulfur deposits. It is processed and used as prefabricated wallboard or as industrial or building plaster, used in cement manufacture, agriculture and other uses.

Most of the world’s gypsum is produced by surface-mining operations. In the United States, gypsum is mined in about 19 states. The states producing the most gypsum are Oklahoma, Iowa, Nevada, Texas, and California. Together, these states account for about two-thirds of the United States’ annual production of gypsum. Over 30 million tons of gypsum is consumed in the United States annually. Canada, Mexico and Spain are other significant producers of raw gypsum. In all, more than 90 countries produce gypsum. In most open pit gypsum operations, benches are drilled and blasted using ammonium nitrate as the explosive.  Because gypsum is so soft, most drills can drill through it at a rate of roughly 23 ft per minute. Sometimes the drill holes become wet, which can cause problems with the ammonium nitrate.  In these cases the ammonium nitrate is bagged in plastic bags before being lowered into the blast hole. Mines use approximately 1 kg of explosives for each ton of gypsum they blast.

The most significant use for gypsum is for wallboard and plaster products. All modern homes in North America and other developed countries use a great deal of wallboard for interior walls. The United States is the world’s leading consumer of wallboard at over 30 billion square feet per year. Some gypsum is used to make Portland cement, and some is used in agricultural applications. A small amount of very pure gypsum is used in glass making and other specialized industrial applications.

Gypsum processing equipment differs significantly in scale and level of technology. some plants produce one or two tonnes per day using low-cost manual technologies, some other plants of a thousand tonnes per day that are highly mechanized and capable of producing different types and grades of gypsum plaster or plaster boards.

There are five basic stages in gypsum processing: