Iron (element #26, symbol Fe) is the most common metallic element in the universe. When pure it is a dark, silvery-gray metal. It is a very reactive element and oxidizes (rusts) very easily. The reds, oranges and yellows seen in some soils and on rocks are probably iron oxides. Iron is the third most common element making up the Earth. Iron is one of the three naturally magnetic elements; the others are cobalt and nickel. Iron is the most magnetic of the three.

The principle ores of iron are hematite, (70% iron) and magnetite, (72% iron). Taconite is a low-grade iron ore, containing up to 30% magnetite and hematite. 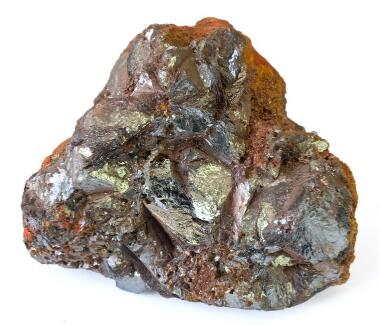 Iron ore is the raw material used to make pig iron, which is one of the main raw materials to make steel. Raw iron is alloyed with a variety of elements (such as tungsten, manganese, nickel, vanadium, chromium) to strengthen and harden it, making useful steel for construction, automobiles, and other forms of transportation such as trucks, trains and train tracks. Due to the lower cost of foreign-made steel and steel products, the steel industry in the United States has had difficult economic times in recent years as more steel is imported. In 2013, the U.S. imported the following amounts of iron ore: Canada, 22%, Mexico, 10%, Korea, 10%, Brazil, 9%, and other, 49%.

In the United States, almost all of the iron ore that is mined is used for making steel. The same is true throughout the world. Raw iron by itself is not as strong and hard as needed for construction and other purposes. So, the raw iron is alloyed with a variety of elements (such as tungsten, manganese, nickel, vanadium, chromium) to strengthen and harden it, making useful steel for construction, automobiles, and other forms of transportation such as trucks, trains and train tracks.

About 98% of iron ore is used to make steel – one of the greatest inventions and most useful materials ever created. While the other uses for iron ore and iron are only a very small amount of consumption, they provide excellent examples of the ingenuity and the multitude of uses that humans can create from natural resources. Powdered iron: used in metallurgy products, magnets, high-frequency cores, auto parts, catalyst. Radioactive iron (iron 59): in medicine, tracer element in biochemical and metallurgical research. Iron blue: in paints, printing inks, plastics, cosmetics (eye shadow), artist colors, laundry blue, paper dyeing, fertilizer ingredient, baked enamel finishes for autos and appliances, industrial finishes. Black iron oxide: as a pigment, in polishing compounds, metallurgy, medicine, magnetic inks, in ferrites for the electronics industry. Major producers of iron ore include Australia, Brazil, China, Russia, and India. 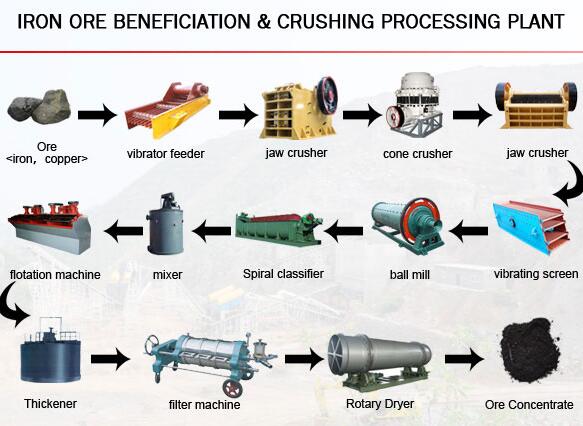 1. Large raw iron ore for primary crushing are fed into the jaw crusher by Plate feeder and are reduced to 8 inches or smaller. After first crushing, the material will be transferred to cone crusher by belt conveyor for secondary crushing; the crushed iron ore stone will then transferred to vibrating screen for classifying. After classifying, the parts whose size below the mesh size will be transferred away as final products, while the other parts will return to cone crusher, thus forming a closed circuit. Size of final products can be combined and graded according to your specific requirement.