What is Kyanite, Andalusite, Sillimanite, and Mullite

Kyanite, andalusite, and sillimanite are naturally occurring anhydrous aluminum silicate minerals. Each has the same chemical formula, Al2SiO5, but differing crystal structures, making them mineral polymorphs. These variances in crystal structure give somewhat unique physical properties to each of the three minerals, and each is used in slightly different ways by modern industry. Mullite is a very rare mineral named for its discovery site on the Scottish Isle of Mull. 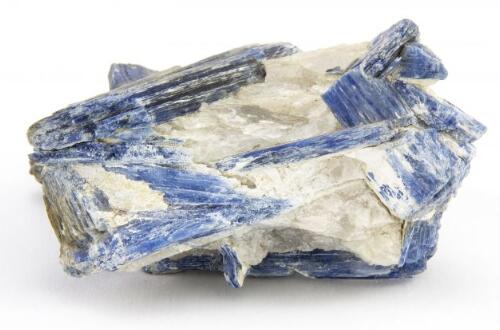 Mullite, although seldom found in nature, can be artificially produced by heating any number of aluminum silicate minerals in certain proportions to the correct temperature.

Kyanite is a blue to light-green, triclinic mineral that occurs in long, thin-bladed crystals and crystalline aggregates in gneiss, schist, and pegmatites.

Andalusite is a yellow, brown, green, or red orthorhombic mineral that occurs in thick, almost green prisms in schist, gneiss, and hornfels. Gem-quality andalusite exhibits a strong pleochroism— brownish-green in one direction and brownish-red perpendicular to it. Andalusite also occurs in placer concentrations where it has weathered out of rock.

Sillimanite is a brown, pale-green, gray, or white orthorhombic mineral that occurs in long, slender, needlelike crystals in schist and gneiss.

The kyanite quartzite is drilled and blasted; secondary breaking is sometimes done with a hydraulic hammer. The ore is picked up with diesel-powered shovels, loaded into trucks, and hauled to the primary crusher. At the primary crusher, the ore is reduced to –4 cm and passed by conveyor belt to the rod mill, which is in a closed circuit with a classifier, to grind the ore to –20 mesh.

Water is added that creates a slurry from which the –200 mesh is removed (deslimed). The new slurry is conditioned with several ingredients and passed through a series of flotation cells that remove the pyrite and micaceous contaminants from the slurry. Tailings from the pyrite circuit are again deslimed and conditioned with other reagents and passed through a section of rougher flotation cells. The rougher concentrate goes to a two-stage recleaning circuit; tails of the rougher circuit go to waste.

The ore goes on to further processing in floatation. Then it is dried and magnetically separated until the final product which is a raw -35 mesh kyanite product.

Andalusite is found the form of black crystals of approximately 1.9-2.5 cm within schist. The ore is drilled with a wagon drill, blasted, and transported with a rubber-tired front-end loader with a 2.29-m to 2.74-m bucket. It is fed into a surge hopper through a 20.3 × 20.3 cm grizzly and discharged onto a 61-cm conveyor belt by a reciprocating feeder. Oversized material is reduced by hand with a sledgehammer to pass the 20.3-cm grizzly.

A conveyor belt carries the broken ore to an autogenous mill, which consists of a large drum revolving on many truck tires. This mill reduces the ore to 100% –0.3 cm before it travels to the furnace, which is air-swept with heated air in closed circuit with two air classifiers. The sized ore is fed into a hopper, from which it is passed over a four-roll high-intensity magnetic separator. The nonmagnetic fraction is conveyed to the heavy-media separator, and the magnetic particles are discarded.

The heavy-media separator circuit consists of a hopper in which the andalusite ore is blended with ferrosilicon slurry and then pumped through a hydrocyclone. The specific gravity of the slurry is controlled automatically by a water-metering device ahead of the blending hopper. The first stage of the two-stage heavy-media separator circuit is controlled at a specific gravity of about 2.3. The final effective specific gravity is adjusted by regulating the velocity of the slurry through the cyclone.

The second stage is controlled in a similar fashion. The heavy (sink) product from the heavy-media separator is screened at about 35 mesh to recover the ferrosilicon media. The finished andalusite product consists of dark brown to black, roughly equidimensional gains ranging in size from –8 mesh to +35 mesh, and contains about 59.2% Al2O3 and 1.0% Fe2O3.

Most sillimanite is mined by hand from massive-sillimanite deposits consisting of huge segregations of sillimanite and corundum, commonly in intimate association and weighing several tons. Considerable hand effort is employed to recover the boulders in a form suitable for sawing to refractory shapes, particularly for the English glass industry.