Description
Monazite is a rare phosphate mineral with a chemical composition of (Ce, La, Nd, Th)(PO4, SiO4). It usually occurs in small isolated grains, as an accessory mineral in igneous and metamorphic rocks such as granite, pegmatite, schist, and gneiss. These grains are resistant to weathering and become concentrated in soils and sediments downslope from the host rock. When in high enough concentrations, they are mined for their rare earth and thorium content. 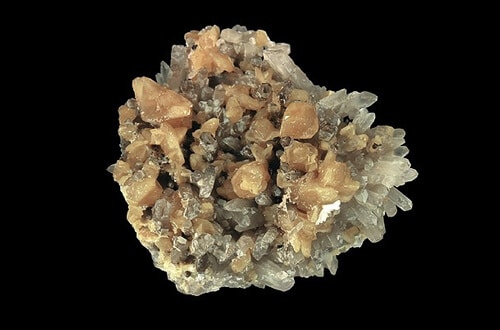 Relation to Mining
All monazite mining is focused on placer deposits because they are easier to mine and the monazite is often present in higher concentrations than in hard rock deposits. Other heavy minerals that accumulate with monazite include gold, platinum, magnetite, ilmenite, rutile, zircon, and a variety of gemstones. The heavy sands recovered are processed to separate these heavy minerals, and the light fraction is returned to the deposit. Stream sediments, alluvial terraces, beach sediments, beach terraces, and shallow water sediments have all been dredged for heavy minerals.

Monazite is not currently mined in the United States. In the past, it was mined from stream placer deposits in Idaho. These deposits formed from weathering of the Idaho batholith. Monazite has also been mined as a byproduct from offshore deposits along the southeast coast of the United States, from North Carolina to Florida. Inland and offshore deposits are known to exist in many states, but they are small, low-grade deposits when compared to what is currently mined in other countries.

Uses
An important source of thorium, cerium, and other rare elements. Often mined as a byproduct from heavy mineral deposits.