What is Nickel Ore

Nickel (element #28, symbol Ni) is a silvery shiny, metallic element. It can be hammered into thin sheets, which means it is malleable. Nickel was discovered in 1751 by Axel Fredrik Cronstedt.

Iron, cobalt and nickel (numbers 26, 27 and 28 on the Periodic Table) are the only three elements known to be ferromagnetic (the strongest type of magnetism) above room temperature. Of the three, nickel is the least magnetic. When all three ferromagnetic metals are alloyed together in combination with some additional elements, an unusually strong magnet, called an alnico magnet, is created. This alloy also conducts heat and electricity fairly well. Alnico magnets are the only magnets that have useful magnetism when heated red hot. 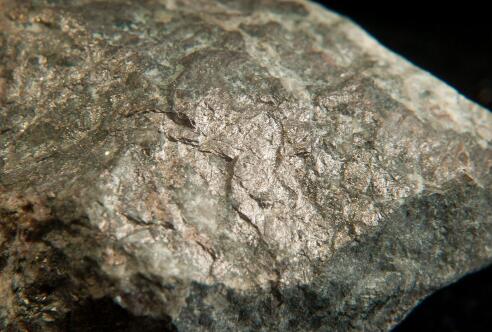 Nickel is usually found in laterite deposits, which are deposits in which strong weathering leaches nickel-rich rock and concentrates nickel at or near the surface of the earth. Nickel sulfide deposits provide the rest. Demand for nickel in the United States is much higher than what recycled nickel can provide, so nickel is imported from Canada, Norway, Russia, Australia and other countries.

The United States had only one active nickel mine in 2013. There are also small amounts of by-product nickel recovered from copper and palladium-platinum ores in the Western United States.

More than 80,000 tons of nickel is recovered annually by recycling stainless steel and other nickel-iron alloys. This represents about 40% of the nickel used each year.

It is estimated that there is about 140 million tons of nickel available in identified deposits. Eighty-four million tons, or 60 percent of the total available nickel is in laterite deposits. A deposit in which rain and surface water leached nickel-rich rock and concentrated the nickel at or near the surface of the Earth is a laterite deposit. Nickel sulfide deposits contain the remaining forty percent (56 million tons).

Demand for nickel in the United States is much higher than what recycled nickel can provide, so nickel is imported into the country. Most of the imported nickel comes from Canada, 34%; Russia, 16%; Australia, 11%; Norway, 10%; and other countries, 29%.

In the U.S., large amounts of nickel are used in the specialty steel industry for stainless steel and related alloys. Stainless steel also contains some molybdenum, titanium and nickel, to increase its resistance to corrosion.  Nickel is used as a coating on other metals to slow down corrosion.

Nickel is also used for a variety of purposes including the production of coins, nickel-cadmium and nickel-metal hydride batteries; as a catalyst for certain chemical reactions; and, as a colorant, nickel is added to glass to give it a green color.

Nickel ore mainly consists of copper-nickel sulfide ore and nickel oxide ore, beneficiation and processing of both methods is completely different. Copper-nickel sulfide ore beneficiation methods: The most important is the flotation. The magnetic and the gravity separation is usually secondary dressing method. Flotation copper sulfide nickel ore: often used in the flotation of copper sulphide minerals collector and frother. 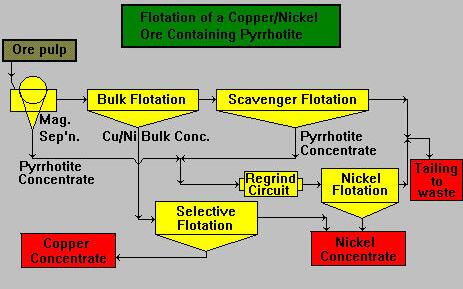 Mixing Flotation Process:
The mixing flotation process is to separate nickel ore in which copper has lower content than Nickel, the mixed concentrate of copper and nickel will smelt into high-grade nickel directly.

Mixing-preferably Flotation then Nickel Recovery:
When the floatability difference happens to the various nickel elements in the raw ore, the nickel ore can be recycled from tailings after the copper and nickel did the mixing flotation.

Copper- Nickel Ore Flotation Process:
A basic principle of copper sulfide nickel ore process is that it is better to let the coppers assimilate into the nickel ore. Because it is easier to recovery cooper from the nickel concentrate. The process has the best advantage-get the copper concentrate that has a low nickel rate directly.