Rubidium (Rb) is a very soft, silvery-white metallic element. Rubidium does not combine with other elements or ions to create minerals.

Like other alkali metals, rubidium reacts violently with air and water. When exposed to air, it bursts into flame, and explodes when put in water. Its melting point is so low (103 degrees F, 40 degrees C) that it will melt on a very hot day. 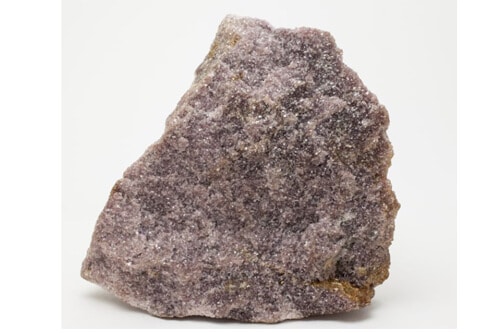 It is found, though, in trace amounts in the minerals that contain essential amounts of other alkali metals that include cesium and potassium rich zeolites, pollucite and leucite, and the lithium rich mica, zinnwaldite (a variety of the mineral lepidolite).

Both of these minerals are typical of a special igneous deposit known as a pegmatite. A pegmatite is an igneous deposit where the magma (molten rock) cools so slowly that very large crystals form.

Rubidium is used in some medical and electronic applications. It is also used in laboratory studies. Possible future applications of rubidium include applications in space travel and to create very thin batteries.