Strontium (Sr) is the 15th most abundant element in the earth’s crust. Only two minerals, however—celestite and strontianite—contain strontium in sufficient quantities to make recovery practical, and these minerals are found predominantly in sedimentary rocks. Strontium is a silvery-yellow, metallic element. Strontium belongs to a group of elements known as the alkali earth metals. Like other alkali metals, it is chemically active and will react with both air and water. 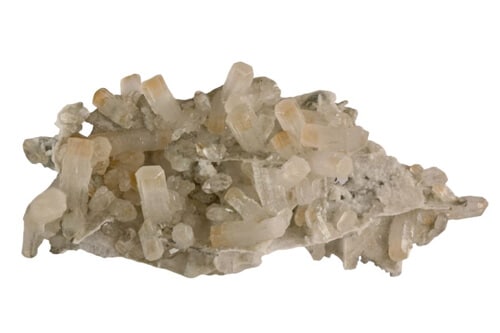 Only two minerals, celestite and strontianite, contain strontium in sufficient quantities to make recovery practical. Of the two, celestite is more common in economic deposits. It is similar in structure to barite, the barium sulfate mineral. Strontianite is more desirable of the two common minerals because strontium is used most commonly in the carbonate form and contains more strontium, but few deposits have been discovered that are suitable for economic development.

Strontium is the element that gives road flares and fireworks a bright red color. Some strontium is used to make special magnets called ferrite ceramic magnets. Strontium was used to make compounds that are applied to the glass picture tubes on color television sets. This compound blocks the X-rays created by the picture tube.