Coal resources are my country's industrial raw materials and important energy sources, and coal preparation technology is the technical source of energy saving and ecological environment protection in coal production. Therefore, coal preparation technology directly affects sustainable development strategies. With the further improvement of the degree of coal mining mechanization in my country, the proportion of slime content in the selected raw coal in coal preparation plants is increasing. If the coarse coal slime is not separated, it is difficult to achieve the ideal separation effect, and it has a high ash content, which has a great impact on the clean coal yield. For this reason, this paper analyzes and introduces several coal preparation processes of dense medium cyclones that have been successfully applied at present. 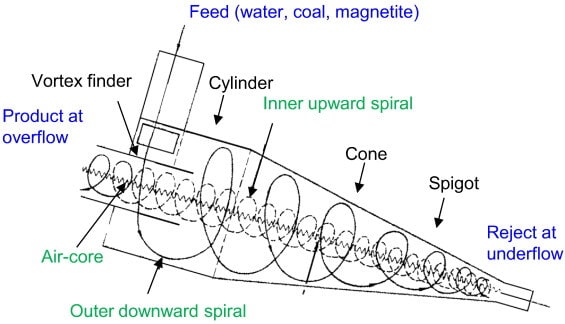 When the heavy medium cyclone is used to separate the coarse coal slime, the desliming treatment of the subsequent product can throw off a part of the high ash fine slime, thereby reducing the ash content of the clean coal and improving the yield.

Dense medium cyclone is one of the main equipment in the coal washing industry. Selecting it for coal preparation production can effectively improve the recovery rate of clean coal and reduce the production pressure of the flotation system. When the heavy medium cyclone is used for coal preparation, the coal and the suspension will be fed into the cyclone separately. The constant pressure box is pressed into the cyclone to form a strong vortex flow, and the liquid flow starts from the inlet to form a descending outer spiral flow along the inner wall of the cyclone; a rising inner spiral flow is formed near the axis of the cyclone. . The coal is fed into the cyclone by its own weight, and is involved in the vortex flow for separating. The clean coal will move upward with the inner spiral flow, and then be discharged from the overflow port; the coal gangue will move downward with the outer spiral flow and be discharged from the bottom flow outlet.

It is well known that for the selection of mixed particle size, the deviation value for evaluating the quality of the sorting results may be the result of weighting, and does not mean that the particle sizes in the mixture have the same sorting accuracy. increase. Therefore, in the coal preparation of the heavy medium cyclone, the fine-grained materials are not well sorted. Therefore, as a heavy medium cyclone supporting the extension of coal preparation, it is well used in the separation of coarse slime.

1. Desliming and non-sliming process before separation. The content of the raw coal slime is relatively high, and the process of non-desliming is adopted before the selection, and the shortcomings are extremely significant. For example, a large amount of coal slime enters the dense medium separation system, and it takes a lot of time to discharge it from the system, and even refines the coal slime, which seriously affects the treatment effect of the circulating water in the later stage. Therefore, it is decided to adopt the desliming process before selection, which can ensure the stability of feeding in the main selection stage, reduce the adverse effect of coal slime on the density of qualified media, increase the lower limit of cyclone separation, enhance the separation effect, and improve the recovery of clean coal. Rate.
2. Determination of the primary method. With the continuous improvement of the technical level of the heavy medium process, the heavy medium separation process has been widely used and promoted in the production practice. For coal washing plants, intermediate products are likely to appear when producing low-ash clean coal. In view of this situation, two methods can be used in the coal preparation process of dense medium cyclone, namely, pressure three-product dense medium cyclone. two-product heavy-medium cyclone with pressure and two-stage pressure, among which, the pressure-based three-product heavy-medium cyclone selects the mode of pumping mixed materials for sorting, but for soaked coal and gangue, the centrifugal pump has a high speed The rotating impeller will have a strong impact on it, and it will even hit and break coal and gangue, or cause sludge. In addition, the gangue passes through the entire inner wall of the cyclone, and it is easy to damage the inner wall of the cyclone. Therefore, this process can be applied to the coal with hard coal and the gangue is not easy to sludge. In contrast, the medium system of a two-stage two-product heavy-medium cyclone with pressure is more complicated, and the one-time capital construction cost is high. However, it has great flexibility and strong controllability in sorting. Compared with the three-product heavy medium cyclone with pressure, it also has the advantages of high sorting accuracy and small amount of circulating suspension.
3. Separation of slime separation process. For the separation of particle sizes below 1mm, the large-diameter heavy medium cyclone separation system is not effective. In this case, a high-efficiency separation process is required to separate the coarse slime recovery and reduce the circulation volume of the slime in the system. , to improve the desliming, desliming efficiency and system treatment effect of the heavy medium system.